I am a collector of Vernonware plaid dinnerware dishes. These bright, cheerful vintage pieces are our day to day dish set, and over the years I’ve learned a few things about the company. Although I’ve already written about my Vernonware, I received the following question from a reader. I thought it was a great jumping off point for further discussion on the marks and history of Vernon Kilns:

Hi! I inherited a Mid-Century house with furnishings, and found Vernonware that I remember using as a child in the 60’s. It is the Homespun pattern. The mark on the back has “Vernonware” in the ribbon, but I have seen some online that say “Homespun” in the ribbon. Is one Vernonware and the other Vernonware by Metlox?

Thanks for your question! Before I answer, let me just say that I am not a definitive expert on marks. I invite anyone who has something to add to please leave a comment. I’ve learned so much from the visitors to my blog! The comments have helped fill in a lot of history, and in turn help us all become better collectors.

So, with that caveat let me give you my opinion. I am almost certain that both variations on the mark originate with Vernonware and not with the later reissued Metlox line. I base this opinion on three things. Number one, I’ve seen Metlox Vernonware marks in books and online, and they have always contained the word “Metlox” in the mark. Number two, I have a small collection of Homespun that I believe dates to the 1940s. I inspected my pieces and even this small group alternated between saying “Vernonware” and “Homespun” in the banner. Number three, marks for Vernonware (and California pottery in general) are notoriously varied so it makes sense that you would see these differences among pieces.

My collection of Vernonware “Homespun” pattern

That’s my short answer, but to further understand Vernonware marks we should start with a brief history of the company. Vernon Kilns was a creative studio that produced artistic as well as utilitarian pieces, and they used a wide variety of marks (or backstamps) over the years.  Some marks on their dinnerware contained the banner but some did not. Some had marks with no mention of Vernon Kilns, and some Vernonware isn’t marked at all! Sometimes, the only way to identify Vernonware is by the shape, style, or other feature.

A few marks found on plaid Vernonware. The mark on left is very uncommon, and most plaids had some variation of the “ribbon” mark on right.

What we came to know as Vernonware started as a company called “Poxon China”. Poxon China was founded in 1912 by a young English ceramist named George J.W. Poxon in the city of Vernon, California. Mr. Poxon must have had clay in his blood because that “W” in his name stood for Wade. Wade as in the famous Wade English pottery. Marks from 1912 – 1931 will usually either say “Poxon China” or “Vernon China”.

In 1931, the company changed ownership to Faye G. Bennison, and under his leadership the company flourished and was now officially called “Vernon Kilns”. Marks from 1931 to 1958 can vary in actual wording, but most included the words “Vernon Potteries” “Vernonware” or “Vernon Kilns”. Many marks also included the name of the pattern, “California” and sometimes “Made in U.S.A”. Vernon Kilns employed some wonderful designers for their art ware (usually decorative pieces like figures and vases) and these may have a mark that includes the artist’s name. Many of these specialty marks will also say Vernon Kilns, although it is important to note that some do not.

Sadly, after many successful years Vernon Kilns stopped production in 1958. Soon after Metlox Pottery, from nearby Manhattan Beach California, bought their molds and after modifying some shapes, produced some of the Vernonware designs for a short time. The marks I have seen from this relatively small run say “Vernonware by Metlox” on the mark.

The Vernon Kilns Staff, 1937. Photo via the book “California Pottery”

The takeaway from this little history lesson? Vernonware marks are inconsistent and changed many times through the years. To further complicate things, there were marks that made no mention of Vernon, and authentic pieces that had no marks of any kind. There is also evidence that Vernon Kilns produced pottery for other companies before they closed production in 1958. These pieces are identified by shape because the patterns and marks are not identified with Vernon Kilns at all.

Collectors often prize the “hidden gems” more than the obvious suspects. Serious collectors of Vernonware as well as other California pottery learn to identify by shape, pattern and quality as much as mark. If you are interested in improving your identification skills, I recommend adding the following books to your reference library. I have certainly found them to be useful and interesting. Happy collecting!

Collectible Vernon Kilns by Maxine Feek Nelson (Second Edition) – The most comprehensive identification and value guide I’ve found. It contains the history of the company, advertisements, and photographs of all the various lines and specialty items. A great reference for the Vernon Kilns collector.

California Pottery: From Missions to Modernism by Bill Stern – As the title suggests, this book takes a larger look at all the major California potteries and trends. This is a written history of California pottery, interspersed with beautiful photographs of exemplary work.

Hi! My name is Cassandra. I'm an internet Groupie, Perpetual Collector, and an Antiques & Vintage Website Owner: www.collectivator.com .
Visit my About page for details, contact info and FAQ. Thanks for stopping by! 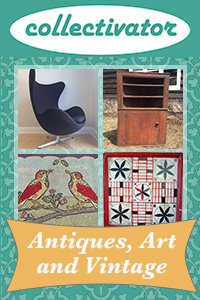 © 2011 - 2016, The New Collector. Unauthorized use and / or duplication of this material without express permission is prohibited. Excerpts and links may be used, provided that full and clear credit is given to The New Collector with specific direction to the original content.
Loading Comments...
%d bloggers like this: